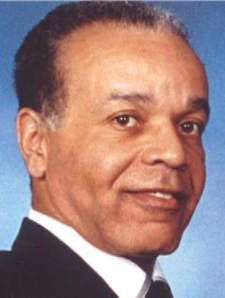 About Bill Johnson
Bill Johnson was educated in the Catholic and public schools of Indiana, graduating from Cathedral High School in 1967.  After working for Chrysler Automotive, he changed his career direction and enlisted into the United States Army in 1969.

After attending Barber College in Indianapolis, he continued his education, receiving an Associate Degree in Electrical Engineering at Ivy Technical College.  For 35 years, Bill was employed by the Xerox Corporation and as a respected employee, became President of the Indianapolis Black Employees Association.

He coached basketball at Tabernacle Presbyterian Church (TAB) and received the TAB Distinguished Coach Award in 1998. Having a zeal for excellence and entrepreneurship, he also established a home remodeling business and the Motherland Gift Shop.

Bill Johnson loved his community and was devoted to encouraging and promoting education.  He was known and loved by many youth of the city as a tutor at the Ralph Dowe Boys Club, Indianapolis Public School #99 and Harshman Middle School. Bill also served as a Sixth Grade facilitator and Board of Directors member with the Minority Engineering Program of Indianapolis (MEPI) and encouraged numerous students to pursue careers in Engineering.

Scholarships are only available to current 12th Grade MEPI Students.